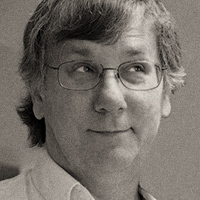 Andrew Amster was born in Lexington, Kentucky where he mostly survived a mostly conventional upbringing. He was accepted into a creative writing program as a college freshman. This took less than a single semester to prove ridiculous; he had yet to do anything in his life and so had nothing to write about. Predictably, this lead to his professors calling his poems “didactic” and his short stories “melodramatic horseshit.” They were not wrong.

Since then, Amster has lived a bit. He has been a geologist, a teacher, an occasional poet, and the writer/editor of assorted science educational doodads. He is the father of two, the husband of one, and has eventually seen years do what years do. He likes movies and hates yard work.

He claims to bear no resemblance to science teachers in his books and is unapologetic for any poem that he may have happened to once write about a supercontinent.

Next up for Smudgeworks Press is Unsealed, Andrew Amster’s second novel. In the last days of their high school senior year, a small group of friends had what seemed to be a harmless idea. They would each write down a secret — something they didn’t think aspiring writer Josh would know. The secrets are placed together in an envelope and the envelope sealed. After ten years, Josh gets the envelope, opens it, and tries to make some sort of literary sense out of what his friends wrote. Turns out, the secrets are just the start and Josh has no clue.